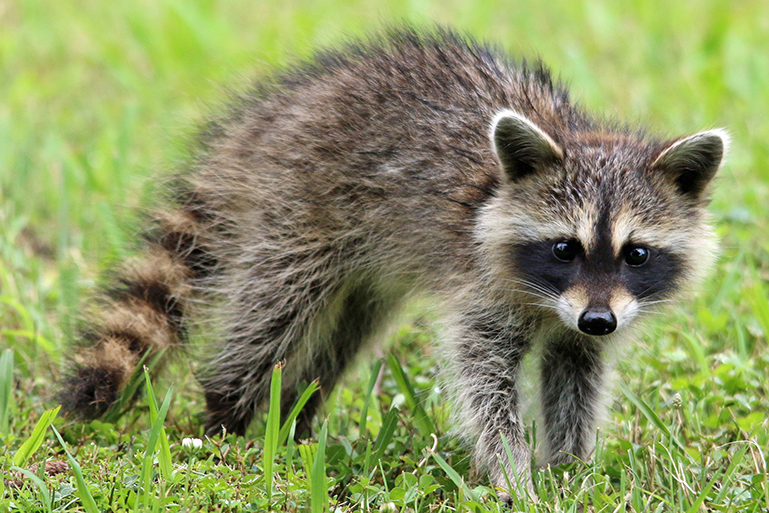 Not only can raccoons destroy a home or business, chewing through almost anything and defecating everywhere, they can also carry rabies and a number of diseases in their feces and urine. The three most common are roundworm, giardia, and leptospirosis.
Call (219) 707-1968 to get a free estimate for raccoon removal, trapping, control, and repair of any damage.

Raccoons are impressive animals. They are great swimmers and climbers, and they use their fore-paws just like we use our hands. Raccoons are intelligent and adaptable creatures that respond quickly to their surroundings. Here in Indiana they have no natural predators and will thrive in almost any location. We enjoy these animals just as much as anyone else while they are in their natural setting. However, once they rip our soffit down, tear a hole through our roof, and start living in our attic or walls, they soon become less of an interesting little creature and more of a nightmare. Raccoons can absolutely destroy a home or business, chewing through almost anything and defecating everywhere. This can cause an economic concern and also a health concern for landowners. When these animals establish their home in your attic, they are trampling down all your expensive insulation and in turn causes you, as a homeowner, to lose valuable energy.

Raccoons can and will damage almost any part of our home or business. We deal with raccoons more than any other animal, and they surprise us all the time. Just when we think we had seen it all, we come across a raccoon that wreaked havoc in a way we had never seen before. However, we are confident in what we do and have yet to come to a job we couldn’t handle.

Raccoon roundworm is a parasite found in the raccoon’s intestines, and the worm’s eggs show up in the raccoon’s feces. People and pets who unknowingly ingest the roundworm eggs may be infected. Symptoms vary but include loss of muscle control, liver complications, fatigue, and blindness if the eyes are affected.

Giardia is an infection that can be transmitted by many animals, including raccoons. Raccoons can carry this organism in their feces and can contaminate water, soil, and any surface that giardia may contact. Humans become infected by ingesting the infective cysts in the raccoon’s feces, of which produces symptoms of nausea, abdominal cramps, diarrhea, and dehydration.

Leptospirosis is a bacterial infection that many animals, including raccoons, can transmit. Raccoons excrete the disease-causing organism in their urine. While leptospirosis does not involve raccoon feces, it is important to know that the possibility of contracting this disease is one more reason to be concerned about raccoons and their associated bodily wastes. Symptoms include aching muscles, headache, high fever, jaundice, and diarrhea. In some cases, infections may be mild or show no symptoms.

Raccoons reside in deciduous and mixed forests. Due to raccoon’s heightened adaptability, they have extended their range to mountainous areas, marshes, and urban areas.

Raccoons forage and prowl from dusk to dawn. Rarely will they come out during the day.

Raccoons eat plant and animal matter depending on what is available. Plant food consists of wild fruits, grapes, plums, chokecherries, osage oranges, green berries, grasses, corn, acorns, pecans, and other nuts. Most of the raccoons hunting is done in shallow pools, turning over rocks, digging into rotten logs, or invading bird’s nests and other helpless animals.