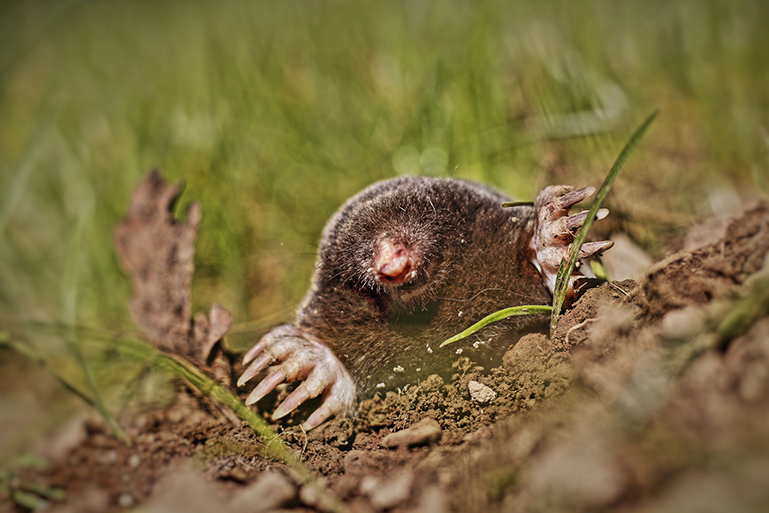 Moles destroy land, creating unsightly and unsafe holes in lawns. Moles can be difficult to remove because they bury into the ground and only very strong pesticides have an effect on them, which can harm other nearby wildlife.
Call (219) 707-1968 to get a free estimate for mole removal, trapping, control, and repair of any damage.

Moles have cylindrical bodies, velvet fur and very small, inconspicuous eyes and ears. They have reduced hindlimbs and short powerful forelimbs adapted for digging. They are able to tolerate higher levels of carbon dioxide because their blood contains a special and unique hemoglobin protein. Moles are able to reuse oxygen inhaled above ground, and as a result, are able to survive in low-oxygen environments such as underground burrows. As a homeowner, you might find mole tunnels and mole mounds throughout your yard. These mole tunnels are actually “worm traps” and the mounds we see are where they enter and exit their tunnels. A mole senses when a worm falls into their tunnel and quickly runs along to kill and eat the worm. Because a mole’s saliva contains a toxin that can paralyze earthworms, moles are able to store their still-living-prey for later consumption. Moles construct special underground “larders” or food storage chambers for just this purpose; researchers have discovered such larders with over a thousand earthworms in them.

Moles are considered pest animals due to their digging habits. They will leave tunnels throughout your lawn and ugly mounds of dirt heaped up all over the place. These mole tunnels will feel soft when stepped on. Moles are carnivorous and do not eat plants. Their tunnels, however, may take out some plants or they may bite a plant by accident. Moles are generally loner animals, rarely coming into contact with other moles.

Moles prefer areas with soft soil that they can comfortably dig into. They do not venture to areas with soil that is too wet, rocky, sandy, or with clay because it is poor digging material. Moles can be found in open fields, woodlands, agricultural fields, meadows, gardens, and lawns. Three to five moles typically live per acre.

Not exactly. Moles typically work and sleep on four-hour rotations.

A mole’s diet consists largely of grubs and other assorted insects and worms. Mole mounds can ruin our yards, but it is how they catch their food.